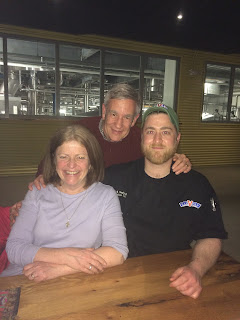 We are hooked on the Netflix documentary series “Chef’s Table,” extraordinary videos that profile chefs around the world, and explore their love for the food they prepare. And they are an eclectic crew for sure. Young Christina Tosi of Milk Bar in NYC pays tribute to the junk food of her childhood, with such creations as cereal milk and “crack” pie (named when her fellow restaurant workers first tasted it and swore they couldn’t stop eating it). Then there’s Dario Cecchini, a charming Tuscan chef who adores introducing people to the lesser known parts of an animal (Dario maintains a reverence for the creatures who give their lives for our nourishment). Closer to home is a video about Cristina Martinez, who cooks traditional Mexican barbeque (barbacoa) in her tiny South Philly restaurant (we are determined to get there this fall).

While all eight of us adult Seyfrieds (plus Aiden, I must add) are avid cooks, only one is a certified pro—Patrick. He’s worked in restaurants since college days, and currently serves as executive chef at Victory Brewing Company in Parkesburg, PA. One of his duties is creating specials for the menu, and I have been delighted when he has contacted me for one of my recipes (baking powder biscuits, etc.) to use in the restaurant. On our anniversary in March, Steve and I ate at Victory, and thoroughly enjoyed the meal, which featured various Victory brews as ingredients. Not sure where life will take Pat, but I do know preparing food will remain an important focus for him.

On Father’s Day, Evan created an amazing dining experience for us at home. It included readings about the Old South, music of the period, and a parade of delicious courses (cooked by Ev) perfectly matched to the theme. We loved it all, and encouraged him to offer more of this kind of cultural adventure in the future.

Last Christmas, as his Secret Santa gift to us, Evan (who was in Thailand Dec. 25th) created and sent a fun parody of the opening credits of “Chef’s Table,” (footage taken on Thanksgiving in Brooklyn.) Seyf's Table

Our dining room table, purchased 30 years ago, could use refinishing. It seats eight, which back in the day was adequate but is getting snug as we pull up extra chairs for guests. We have definitely not always dined in culinary splendor there, but we have always been nourished, in body and spirit. We rotate several “graces” before we eat, from the classic “Bless us O Lord,” to the preschool song, “Thank you thank you thank you God, for our family friends and food.” We hold hands, and end with a resounding “Amen.” Nowadays our grandsons are in the mix, and I am overjoyed to see them each clasp a grownup hand, even little Peter crowing “A---men!”

We have had so many happy times around Seyf’s Table, and while at some point it will surely need to be replaced, it will never be replaced in my heart.


Posted by Elise Seyfried at 12:29 PM No comments:


I brag about the journals I kept for each of my five kids. My listener logically assumes that I have penned the story of my offsprings’ entire childhoods, day by day, even though an actual written reckoning would have made Proust’s massive oeuvre look like a grocery list.

So: true confession. I started a journal for each of them, with the first entry during my ninth month of pregnancy, filled with hopes and dreams for the babies I had yet to meet. Entry #2 was always written in the hospital. I’d sit there scribbling, with regular doses of Tylenol, and helpful nurses. It was easy to convince myself that this time, I’d be able to keep up the record books.

But then I’d get home. Home to feedings that seemed to stretch from 8 PM to 6 AM, with 10 minute catnaps in between, and the chaos caused by my resident toddlers. I would reach for journal and pen, only to discover that the pen was out of ink and I was out of steam. So the daily entries I had pledged to keep up, became weekly, bi-monthly, until finally there would be one or two annual posts, written in a frenzy during my VERY rare alone times. “Dearest PJ, It’s May and you are five! Can it be that the last time I wrote you were still in diapers and weren’t yet walking? How the time flies!”

I’d try to memorize their adorable quotes by writing them on whatever was handy (envelopes, index cards), but sometimes I’d forget which of my little darlings had said what cute thing. “Hmmm, that sounds like a Rose comment. Or is it?” In the end, every single time, the journals would peter out around age seven, never again to be updated. I’d swear to do better with the next little Seyfried in line, but never had the energy to follow through.

One night long ago, I asked my father to share a childhood memory—ANY childhood memory. I was desperate to connect with him, and he was so quiet and withdrawn. He thought for a few minutes, then shrugged. “Nope! Don’t remember anything!” I was appalled—how can you not remember your own life??

But then I look back and try to reconstruct some of those crazy years with five under age 10. Without journal entries, I am often at a loss. Names of teachers and coaches float randomly through my brain, disconnected from the children they were connected to. Summers down here in Lewes, playing Home Run Derby in the backyard, boogie boarding in the ocean. I remember it was (mostly) fun, but otherwise it’s just a snapshot here and there that lingers.

There will, alas, always be gap years in my memory—and that situation is bound to get worse. I can only try to fill in the gaps by recalling feelings. Joy. Pride. Love. Because, in the end, that’s my primary takeaway from parenthood. And I am lucky indeed.


Posted by Elise Seyfried at 1:22 PM No comments:

My first flight was from Atlanta to New York in December of 1968. My family had moved south the summer before, and this was our holiday journey back home. I remember just two things from the experience: my hot meal (which had all the appeal of the Swanson’s TV dinner it so resembled), and the air sickness bag, into which I deposited said meal soon after consumption. “Bumpy” doesn’t begin to describe takeoff, touchdown and just about everything in between.

Over the years I've logged quite a few miles aloft. However, I didn’t focus on the many changes in air travel until I flew to South Dakota on a mission trip four years ago. One of the chaperones was a church friend who revealed he hadn’t flown in decades. He marveled at the smooth ride (not a barf bag in sight), but wondered where all the food was; I remember him staring in disbelief at the small bags of cookies which had to sustain us until we touched down in Rapid City. Through his eyes, I noticed other things—the flight attendants, no longer identical Barbie dolls, but average looking people of all ages (yay!). The individual screens in front of us, where we could choose our entertainment from a library of movies and TV shows. Back in the old days, there were no reminders to turn off our electronic devices—the only ones with those were the pilots. Biggest change of all, of course, is airport security. Back then, no serpentine lines or shoe removal or alarms going off because you left your keys in your pocket going through the metal detector.

I have flown puddle jumpers to Nantucket and 767s to Italy. I have sat next to businesspeople who spend the flight glued to their laptops, which I actually prefer. One 50 hour flight to Costa Rica (or maybe it just felt that long) my seatmate was a missionary, who, learning I was traveling with a church group, regaled me with nonstop tales of his adventures saving the poor souls in several Latin American countries. I try to send out the “I’m lost in thought!” vibe, thus cutting out some of the awkward stranger chatter, but it doesn’t always work.

One thing hasn’t changed: the safety lesson before we ascend. Nowadays it’s shown on video, but it used to be given by a visibly bored stewardess, modeling the oxygen mask and reminding us all of the peril we might face. I am always terrified during these presentations, because what good does the little light on your life vest do when the plane’s gone down in the middle of the Atlantic? Make it easier for the sharks to find you?

Steve and I are planning a trip to Europe next year, and while I can’t wait to see Prague and Budapest, I dread flying there, freezing beneath the flimsy airline blanket all night, dreaming fitfully of emergency exits and sudden evacuations. Oh, well.

At least there'll be complimentary wine.


Posted by Elise Seyfried at 12:21 PM No comments: