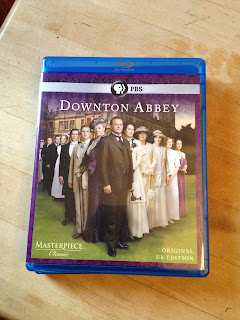 It takes me a little while to hop on the bandwagon. By the time I do, everyone else has jumped off and hopped onto the next bandwagon. It is this way with food (broccoli rabe), fashion (ballet flats), technology (iphone: idon’t have one) and popular culture. My hot new singer is on his third album and other music lovers have moved along to someone who genuinely is at the dawn of a career.

So it is perhaps no surprise that I am only just now getting around to Downton Abbey. Julie, Rose and I had a catch-up marathon recently, during which we watched all of Seasons One and Two. Originally skeptical of the show’s power to fascinate, we are now rabid fans of the Crawleys and their platoon of servants. Never mind that it is a glorified and gussied-up soap opera! We love Lady Mary and her Matthew (upstairs), Mr. Bates and his Anna (downstairs), etc.

Most of all we love those British accents. They make the speakers sound intelligent and witty, no matter the content of their conversation. To my mind, anyone from the U.K. can recite the phone book (remember them?) and be positively spellbinding.  I am a total sucker for foreign accents of any kind. I hear “oui” or “ciao” and I immediately think: mysterious and fascinating, a Person with a Capital P Past. Never mind that that Past may have included a snooze-worthy job and  ho-hum family life…for me, speak with an exotic flair and you are  a superstar, or a superspy—super something, anyway.

I may be wrong, but somehow I don’t believe our various American dialects have the same romantic appeal overseas. For example, I am a native “New Yawkuh,” and Steve hails from Indiana, where “pin” and “pen” sound exactly the same. As actors, Steve and I worked hard to rid ourselves of all vocal traces of the lower East Side of Manhattan and Bradbury St. in Indianapolis. We achieved only partial success, and still lapse into the not-so-mellifluous sounds of our youth. Some accents are charming. Our accents are just kind of annoying.  The South is a hotbed of various speech patterns, from flat (Arkansas) to the Gone with the Wind drawl (Georgia), but again, I just don’t think “y’all” evokes intrigue; rather, it evokes an image of grits and gravy. My brother-in-law Rob is from “Minnesohda,” and when I listen to him I’m smack dab in the middle of A Prairie Home Companion. His is a sturdy and stoic parlance typical of one who used to shovel several tons of snow out of his driveway annually.

Perhaps familiarity breeds boredom. It may well be that Jacques in Paris finds parler en Français très dull, but he would delight in a good ol’ Texas twang.  Maybe Elly Mae Clampett would have a full dance card if she ventured across the pond. I rather doubt it.

Posted by Elise Seyfried at 2:42 PM No comments:

Who Am I This Time?


If you ask my family members about their work lives, prepare for quite an earful. It occurred to me the other day that, among the eight of us Seyfrieds, we hold no fewer than 25 jobs. Steve is a writer, actor, producer, director and teacher. I am a church worker, actress and writer. Sheridan and Ya-Jhu are composers, instrumental musicians, church music directors and teachers. And so on. We are always heading off to work in a million directions, and let me tell you that can be confusing. It reminds me of the short story by Kurt Vonnegut, "Who Am I This Time?" In the story, Harry Nash, a shy hardware store clerk, transforms himself regularly in his very different little theatre roles.

Only with us, our transformations happen daily, if not hourly. The Evan who toils away at a Navy job in Washington DC becomes pianist/accompanist Evan by night and weekend. Rose juggles so much
freelance work that I can't begin to keep it all straight, and don't know how she can either. PJ the full-time college student is also PJ the deliveryman for a local apothecary. Besides the eternal challenge of arriving where we are supposed to be on time, we are constantly switching skill sets. Jules is Jules, but Jules with a dust rag in her hand as a housecleaner is not quite the same as Julie the elegant stylist for a jewelry company.

As children, our kids had the usual ambitions, but often in multiples. Sheridan in particular planned to be a pitcher for the Phillies AND first violinist with the Philadelphia Orchestra (he figured the seasons didn’t really overlap, so why not?) As they grew, it became clear that they would not be pigeonholed. They have too many interests to limit themselves to doing one thing. for a living. The other issue, to be honest, is financial. No one job will fully support most of them at this point. But even if that weren’t the case, I can’t see them all settling into a single groove happily. This diversity of activity energizes them, and energizes their parents too. It’s stimulating to wear different hats, and to tap into different parts of ourselves to suit our various tasks.

In my case, I do wonder if it’s partly my attention span (or lack thereof.).  After a certain number of days, I simply have to jump over to an entirely other position for a while because I’ve lost focus on Job #1. For example, I do nothing but write on my day off, Thursday. Shopping and chores be darned! This literary hiatus is just the change I need from my busy church life.

There are times I know that I, at least, envy those with only one job and regular hours (not to mention such niceties as good benefits and retirement plans). But clearly the single-career life is not for us. And so, when we look in our morning mirrors, we ask ourselves, “Who are we this time?”