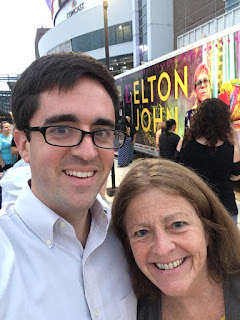 So what was up with you last night? Me? Oh, thanks for asking. Nothing much, I was just at Elton John’s second stop of his farewell tour. Seriously, though, it was an amazing event, held at an arena filled with 20,000 delighted fans. Much as I love his music, I had never seen him live, and knew this was my last chance to do so. My “date” was Sheridan, who treated to the tickets.

During the concert, the Great One thanked the audience for his nearly 50 year (!) career. He first performed here at the Electric Factory in 1970. I was 13 at the time, and unaware of either Elton John or, really, Philadelphia. But after I got to high school, I became a fan, and last evening’s 24 song performance included most of his greatest hits, many from the era that evokes some of my strongest musical memories (the 70’s and 80’s). I can picture my angst-y teenage self in Atlanta, lying on my bed, listening to “Someone Saved My Life Tonight,” and “Tiny Dancer” and “Rocket Man” and “Take Me to the Pilot” all of which he sang (and played the heck out of on piano) yesterday. He also sang some more recent numbers, but it was the oldies that the crowd came to hear, and we were not disappointed.

Sir Elton looked just the way you’d imagine-shaggy hair, crazy jacket, huge glasses. The special effects were astounding (when he played “Burn Down the Mission,” it actually seemed as if his piano was in flames). He played for almost three solid hours with no break of any kind, and it was clear he adores being onstage. This “Farewell Yellow Brick Road” tour is final because he has a husband and two small sons now, and wants to spend as much time with them as possible.

I have a couple of odd connections to Elton John: he lives part of the time in an Atlanta apartment building, where he owns two floors. That happens to be where my dear friends Molly and Jeff live (when I visited, Molly and I took the elevator to one of his floors to see the hallways filled with artwork—EJ was out of town, sadly). And years ago, when sister C was manager of the men’s department at Neiman Marcus, Elton would come in and clothes shop often. By all reports, he is a very nice guy, and uses his fame for good (His AIDS Foundation has raised over $400 million dollars to date).

We can’t all be superstars, of course. But we can be the stars of our lives, doing the things we love, sharing our talents (and we all have them), making a difference. So, from now on, I will try to take a page from Elton John’s book. Not taking up songwriting, not wearing ridiculous getups. But putting a little more pizzazz and sparkle into my days, and giving every minute I am here on earth, my very best.


Posted by Elise Seyfried at 2:13 PM No comments:

Doesn’t it seem as if people’s body parts are wearing out faster these days? I’d noticed my appliances and computers were going on the fritz at a more rapid rate. Now, though, it’s hips, even more than televisions, that are being swapped out for newer models. One of my dear friends (who’s in her 90’s), got a new hip last spring, and she is now pain-free and back to her former, amazing level of activity. But I also have a dear friend very near my age who faces the same surgery next month, which is awfully young to me. Some of my still-middle-aged buds are on their second round of replacements! What the heck is going on?

Even as I note the defective hip sockets all around me, I mark the number of bum knees going under the knife as well. My hips, while perhaps a bit wider than I would like, are still fully functional. I wish I could say the same about my knees.

As a Catholic child, I spent an inordinate amount of time kneeling in church, from the initial genuflection as I entered the pew, to the many times during the service when the only appropriate place to be was perched on the kneelers. I do not recall ever being bothered by this.

During the past few years, however, this aging Lutheran lady has come to dread the Prayers of Intercession, when we are invited to “kneel as we are able” for the lengthy litany of petitions. Sure, sending communal prayers for the world Heavenward is a vital part of the worship experience. But recently, my knees have begun to ache during the first “Lord, hear our prayer.” By the time we are praying for our rivers and forests, I can only concentrate on my increasing pain. When we are invited to utter personal prayers, silently or aloud, I just want to say, “Owwww!!!!” As a cruel joke, the prayers are immediately followed by a speedy spring-up and segue into the Passing of the Peace, moving rapidly all over the church hugging and shaking hands. In anticipation, I’ve started easing back into a quasi-sitting position on my seat around Prayer #5, so that I can stand up smoothly when the moment arrives.

And it’s not just Sunday mornings. I can no longer kneel comfortably while playing with Aiden and Peter. Clearly, I should consult a doctor about this. Knowing me, I will not. Surgery, for any reason, has zero appeal to me. I braved the agony of a torn rotator cuff for months because I refused to consent to an operation. I imagine I will continue to hobble around until I collapse, clinging to my original joints for dear life.

I’m perfectly willing to consider a replacement when, like my friend Hy, I am 93. Until then, I will count on the body parts I was born with, however unreliable they are. And if it means becoming Quaker (they sit throughout their meetings), so be it!

Posted by Elise Seyfried at 11:56 AM No comments: