You know the old saying, “Always the bridesmaid, never the bride”? Well, I was reminded of that Friday night downtown, as once again I was not chosen to tell a story at a story slam. Now, mind you, that was only the second slam I had put my name in a hat for, but at this point I get it: I will NOT be picked. Ever.

My first foray into slamdom happened about two years ago, with a story slam at the World Café in West Philly. I foolishly thought I had a chance, and toted several friends down with me. Rose even surprised me and came all the way from New York. I had a great tale to tell, and I was more than ready to tell it! We wannabe storytellers were instructed to fill out a paper with our names, which would then be placed in a hat. From that hat would be drawn the performers for the evening.

I recall sitting, nervous but excited, awaiting my turn at the mic. I planned to relate the story of my ill-fated filming of a low-budget local TV commercial in Knoxville, Tennessee, many moons ago. It had everything! Humor! Suspense! Absurdity! It was a commercial for Kay’s Ice Cream, filmed by the producer’s hapless son in his mother’s kitchen. The comedy of errors included industrial lights burning the kitchen ceiling, and an unplugged freezer containing the star of the show (melted vanilla, anyone?) 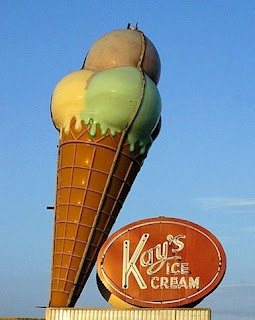 But alas! The World Café (and the world in general) was deprived of my brilliance that night, as the evening ended without my name called. I was bummed, but not defeated. Surely I’d make it next go-round!

As the years passed, I determined to try try again, this time at a Moth Story Slam at the Painted Bride Art Center. I had worked up another true, yet fabulous story, this one about the night our apartment neighbor threatened to kill us (yes!) This time, the odds were with me: a mere 21 people had put their names in, for 10 possible slots. 50-50!! I was in for sure!

I wasn’t the first one chosen. No worries!! Nor was I the second. Or third. Number four was a woman whose daughter dared her to try out! She didn’t even really want to do it! But that’s not all! Number six was…the daughter herself! Performance lightning had stuck twice in the same family!!!

Some of the remaining stories were great, some were REALLY lame. None of them, alas, was mine. The evening ended in sadness, as once more I struck out.

On the drive home, I made up my mind: no more slams for me. It’s just too depressing to work hard on a piece, only to be snubbed time and again. I am lucky in all the ways that matter most: my incredible family, my wonderful friends, good health.

But gee, would it kill the universe to grant me one lousy shot at a story slam as well? 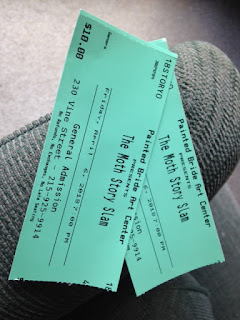