It's the Thought that Counts? 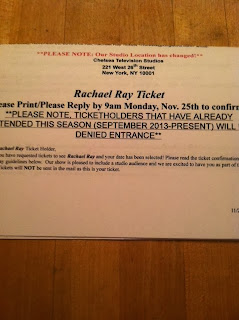 Just got the most thoughtful early birthday present. My friend Mary Ellen wrote in for tickets to a taping of The Rachael Ray Show in NYC on December 5th for me and my daughters (Rose, Julie and Ya-Jhu), and the tickets came yesterday morning! Those of you who know me as a cook know how often I use Ray's recipes (several times every week), so I'm as excited as a tween girl going to see Taylor Swift!!

I am lucky enough to be surrounded by gifted gift-givers. I marvel at their uncanny ability to choose exactly what the recipient would love, without outright asking them, so there's the wonderful element of surprise. Included in my Gifting Hall of Fame are my husband and kids, who never fail to come up with presents that others were dreaming of. I'll never forget the year Rosie (who was REALLY young) saved up enough money from her baking business to buy PJ his heart's desire, a Gameboy Color (remember them)? There had been a typhoon near their factory in Asia, so shipments around Christmastime were extremely limited. Undaunted, Rose went on eBay and found the coveted toy, paying much more than she should have, but so delighted to give her brother this treat.  Yaj is also stellar in this department. For someone who hasn't known us that long, she ALWAYS picks the perfect things, accompanying them with the cutest notes. And, truly, no one tops Julie. She is so
savvy and clued-in that, last year, I gave her my credit card and asked her to do the Christmas shopping for me. She did an incredible job, and everyone got what they actually wanted (and she came in under budget).

Which leads me to my confession. I am a dreadful shopper. I mean well, really I do. But mine is the unfortunate combination of unobservant and perpetually low on funds come birthdays and holidays. I can only guess at what my loved ones would like, and my guesses are invariably wrong. I stand in the mall, paralyzed, Nat King Cole crooning "Chestnuts roasting..."on the sound system. Finally, in desperation, I purchase either something they already have (and I didn't notice), or something that isn't their taste at all. Everyone is always so nice, and acts like they're pleased with my offerings. But I know better.

So here we are again, heading rapidly into “the most wonderful time of the year.” Others of my acquaintance have squirreled presents away since last January, and now have only to wrap and label and put under the tree. I have purchased zero, a state of affairs likely to continue until December 20th, when once more Nat King Cole will provide the soundtrack to my in-store panic attack.


I hope my family and friends know how much I love them, how grateful I am for them. I hope they will forgive my misguided efforts to buy for them. I promise to include the gift receipts for quick and easy returns!

Out of this World

I’ve got to tell you, I am completely nutty about outer space. From  Close Encounters... at the movies, to Mary Doria Russell’s incredible book The Sparrow, to stargazing on the beach at night, I am enthralled by the sheer majesty and scope of the universe.

In the heyday of NASA, I followed each manned space flight eagerly. I remember watching Neil Armstrong set foot on the moon. It was July, 1969, and we were staying in a TV-less cottage in Normandy Beach, NJ. Our next door neighbor, Dave MacDonald (age 95), had a television set and invited us over. He had served in the Spanish-American War, among other amazing life events, and I wondered how he would react to this most momentous occasion. As it turned out, he fell asleep just before “one small step for man,” and his guests were left to marvel as Old MacDonald snored in his recliner.

More recently, I was fascinated by the discovery of a planet much like ours, in another solar system.  Gleise 581 g, dubbed the Goldilocks Planet by scientists (“not too hot, not too cold, just right” for life), could indeed harbor, or have harbored, life similar to ours. Looking ahead hundreds, if not thousands of years, wouldn’t it be cool to pop by and visit this place and (possibly) this people?

In fact, in 2008 a digital time capsule was launched, containing snippets of our Earth culture, from messages from world leaders and average citizens, to the music of Beethoven, Bach and Chuck Berry. It passed Mars in 4 minutes. This boggles my mind—a communication that reaches another planet quicker than my kids respond to a call to wash the dishes!

One week our adult ed class at church wrestled with the question: where is God on maybe multiple sentient being-sustaining planets? What does this do to our comprehension of the Bible? Is the God of Israel the be-all and end-all, or the God of a people limited by their understanding? It was an interesting conversation to say the least.

I believe that when we are threatened by the possibility of extraterrestrial life, we put our human limits on a limitless God. Why is it impossible that God who we believe created everything that is, cares for life forms elsewhere? Could God send a Jesus to them, to enter into their pain and offer them life eternal? Why not?

Father Francis Delano, Many Worlds, One God: "Any person possessing a religious faith that conveys an adequate idea of the greatness of God's creative ability, of humanity's humble position in the universe, and of the limitless love and care God has for all His intelligent creatures, should not be afraid to look at the evidence....that indicates that we humans are not the only ones in the universe having intellects and wills capable of knowing and loving God."

And from the movie Contact: “I guess I'd say if it is just us...it seems like an awful waste of space.”

"Neptune" from Gustav Holst's "The Planets"


Posted by Elise Seyfried at 7:32 AM No comments:

I did something to my arm about four weeks ago, and it’s killing me. It feels like pinched nerves; I can barely lift it without intense pain. It has interrupted my sleep, and makes it hard to type at work. If this keeps up, I tell you, I’ll have to go to the doctor within the year! Meanwhile I struggle wincingly through my routine, willing this whatever-it-is to go away on its own.

I don’t do the whole injury and illness thing well. It’s a good thing I rarely get sick. In the past 29 years I’ve had pneumonia once, had maybe two stomach bugs and one bout of the flu. I think, given my house full of children, that’s a remarkable track record. 99% of the time, I’ve been able to soothe fevered brows and clean up from upset tummies without catching anything myself. Even when the entire household comes down with the same disease, I remain the last mom standing, as it were.

As a little girl, I was usually fit as a fiddle. My sisters, on the other hand, got everything that came down the pike. C had the mumps as a baby, all on one side of her neck. She was just learning to stand up, and I recall seeing her hoist herself up in her playpen—and promptly fall over on her swollen side. And poor Mo! Perpetually plagued with one thing or another, all her life. Maureen was such a sweet, motherly child that, in school, she was always the one who helped the kid who’d just vomited. Of course, she would promptly catch whatever that kid had, and be twice as sick.

Through childhood I breezed, with nary a broken bone or serious fall. My secret? The bare minimum of exercise. One would be hard pressed to sprain anything while sprawled on the sofa watching Petticoat Junction.

Nowadays, on the rare occasions when I do get hurt or become ill, I am the most impatient of patients, a giant pain when in pain. I insist on maintaining my daily schedule at all costs, stubbornly shooing away all offers of help. No, I don’t want any damn ginger ale! Give me the car keys! I’m going to work! And do NOT suggest I take medicine! Apart from the two pills I must take daily for
my mental well-being, I refuse any and all cold remedies, temperature reducers and stomach settlers. I wish I could say it’s because I prefer a holistic regime of vitamins and health foods, but in fact my diet is only so-so, I am a big meal skipper and a caffeine fiend.

At some point, I know, my body will betray me, and I will succumb to the various viruses and ouchies that others have as a matter of course. For now, though, I will keep on cancelling doctor appointments and refusing to believe I am not immortal.