Can You Keep a Secret?

I certainly can’t, or at least, it’s hard for me. I have no problem keeping the tough stuff, the stuff people deserve to keep to themselves, secret. But it’s the good stuff that gets me every time. Engagements, admissions to college, new jobs—I know I need to take my cue from the people whose news it actually is, but it kills me to wait. I want the world to know…preferably, know it from me first!

Some people are just much more private than I am. Take my father, for example. Dad told his family

next to nothing about himself, ever. I remember a homework assignment from one of the nuns in school, asking us to interview our parents about their lives. Mom Joanie readily complied, filling pages with her personal stories. When it was Dad’s turn to be questioned by me, he said (and I quote), “Tell Sister Brendan that it’s none of her damn business.” Then he left the room. I think I ended up telling Sister that Dad was out of town that week.

As a result, I only heard some of the colorful tales of Dad’s life second-hand…such as those of his own father, Pop Cunningham. Pop, as an 8th grader in 1913, used to leave for school in the morning, and end up instead at the horse stables in Central Park, smoking cigars and drinking sarsaparilla. Pop
grew up to have some rather shady “associates” in his trucking business. Once he left the state for a few years and laid low in Chicago (I believe evading income taxes). Pop had his kneecaps broken one night by a couple of goons he had crossed. He would proudly point out the huge gilt-edged mirror hanging in Luchow’s Restaurant—and the bullet hole in the frame, courtesy of him, during a wild party there. What a character!!! The budding writer in me could NOT understand keeping him a secret, but my dad was totally mum.

So I came to equate “keeping secrets” with selfishly hoarding important information, and was determined to be an open book. Everyone knew when I was pregnant by the third day after conception. Everyone knew all my mothering and acting bloopers. And, alas, everyone knew some things about my kids that I’m sure they’d have much preferred they didn’t.

Over time, I’ve learned to curb the blabbing somewhat, but it’s an ongoing issue with me. You can trust me to the grave with your sad secrets, but don’t let me hear about your award, your new career, or other personal triumph. It may be your news to share, not mine, but that hasn’t stopped me yet!

Posted by Elise Seyfried at 1:03 PM No comments:

Photo Doggies for Me

I don’t know how in the world it happened, but suddenly one day on Facebook I started getting posts from something called “Photo Doggies for Anthony.” It is pretty much just what it says—photos of dogs, for a guy named Anthony. Specifically, Anthony is a teenager who it seems is very ill, and indicated that puppy pix would cheer him up. What started out small, has grown into the St. Bernard of FB pages…every day I am treated to literally dozens of pictures and captions: dogs snoozing under a tree, dogs dressed up with scarves and hats, happy dogs, sad dogs, etc. etc.

Which would all be fine, except for one thing: I am not a huge dog fan, and am sure I was added to this list by accident.  So why don’t I opt out? I think it’s my combo of laziness and curiosity…what does a dog lover post? Everyone talks about their “fur babies” and their “forever homes.” I get it; some people are batty about their pooches—and that’s great. But sometimes someone will post a simple request like “How can I get myself off this list?” You would think they had expressed a desire to commit murder! The responses often sound like: “Why don’t you delete yourself? What’s the matter with you?? You are a despicable person and on top of that, you’re full of negative energy!! Long live Photo Doggies!!!”

Seriously? No one is allowed to disagree with you without being raked over the comment coals? I wonder what poor Anthony thinks about the venom dripping from some of these folks. If I started a page called “Photo Babies for Elise,” I would NEVER blame anyone for unsubscribing to it—not everyone thinks miniature humans are all that cute. And I certainly wouldn’t insult and berate them if they decided against an endless parade of toddlers in their news feed. So yeah, I should remove myself from Anthony’s A List, and I will…one of these days. 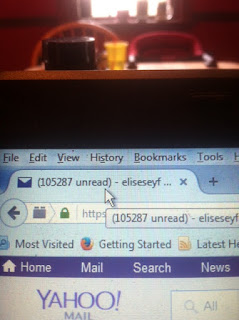 Then there’s my incredibly clogged email inbox. I save it all, and I do mean all. I do not exaggerate when I say my Yahoo account has 145,284 saved messages, dating back 13 years. I am glad for endless storage most of the time, because I often go back to my old emails to find things I need to refer to again, and people with whom I should reconnect. But that doesn’t mean I have to save my daily LOFT 40% off sale notices, does it? Knowing LOFT, the next 40% off sale is mere hours away (why don’t they just go ahead and price all their clothes 40% lower and be done with it?) No internet correspondence is too unimportant to hold onto, is my motto! One of these days I will get it together and streamline everything. But not today.

Now if you will excuse me, my exciting life online beckons. 10 new emails from Travelocity! Pictures of shelties with sunglasses on! There’s so much to see and save!!!
Posted by Elise Seyfried at 2:48 PM No comments: