Too Old for This

So, in a fit of I-don't-know-what, I decided February 22nd would be midnight bowling/lock-in at church for the youth group. At the time (January) it seemed like a good idea. As the 22nd approached, however, I became increasingly apprehensive. I am at the stage in life when staying awake through the SNL opening is a heady victory over the forces of aging. What made me think I could remain conscious through an all-nighter with 20 teenagers?


As it turned out, I could--barely. I took a power nap before leaving the house that night, which meant I could at least bowl without slumping over in the lane. When we closed the joint down at 2 AM, it was back to church for a massive treasure hunt I had devised, with 50 rhymed clues leading to a candy jackpot. Took the kids a satisfyingly long while to complete. Then it was movie time!! As I watched Jim Carrey's rubber face contorting on the screen, and kept a simultaneous eye on the young ladies and gentlemen, massive fatigue kicked in. 5:00 AM was lights out (at last!), and 7:30 AM was lights back on (oh no!) for a pancake breakfast and fond farewells. In a daze, I cleaned up and closed up shop, and went home, wondering if it was OK to call it a day at 3 PM.

Years ago, I was a true night owl. Between putting off term paper-writing until the last possible nocturnal moment, and working in a restaurant--where the fun began after the final patron exited the building--I was a wee-hours kind of gal. My life in the theatre meant that the work day commenced with an 8 PM curtain and went from there. Even in later years, after the babes were born, I didn't struggle (too much) with 2 AM feedings, and then often flipped on the light to read until nearly dawn. Never seemed to need that much sleep. I pictured a happy future of round-the-clock productivity, squeezing every drop of juice out of life.

But yesterday morning, I had to face the music. I am 56 years old, and, finally, too old for this. I glance in the mirror (only a glance, any longer would be too painful) and there are my myriad wrinkles. I am aware that, without my trusty dye bottle, I would be completely gray. My formerly hummingbird-like metabolism has slowed to a crawl, and now even photos of fattening food magically appear on my hips. My mail mocks me, with its AARP notices and invites to check out senior adult residences--and what's really scary is, this stuff is starting to sound tempting.

I may have just had my last all-nighter, and it hurts to realize that those days are probably gone forever. The kids, no doubt, grabbed a little snooze and were good to go, while I will be recovering for weeks.

In my heart, I'm still in my twenties. But, alas, the body doesn't lie. Yawn.

Posted by Elise Seyfried at 1:13 PM No comments:

Dear God, please reveal to us your sublime beauty

A Valentine’s Eve question for you. C’mon, fess up. Do you keep your old love letters? I have a box in the attic filled with them. Steve and I were separated during our engagement when he was in Connecticut studying for his master’s degree. One of these years, I will steel myself and open the box. I’m not really sure how I will feel when I re-read the words of a giddy young girl and her fiancé. Probably a bit embarrassed by their effusiveness. I do know that the letters are so private that I could never share them with my children, or anyone. They are the very definition of intimacy.

But I will likely remember that feeling (remember that feeling?) The crazy, head-over-heels feeling of new love. When the beloved seems absolutely perfect, when every conversation is magical and every touch is a poem. I cannot reliably tell you the clever repartee my dear husband and I shared this morning (though I can guess it was along the lines of my “Can you make more coffee?” and his “I would if you had remembered to buy it!”), yet I vividly recall what movie Steve and I saw the first night we kissed (The Way We Were). My senses were in sharp focus, and everything I saw, or heard, was touched with beauty.

I had never connected this intense feeling to the Almighty, until I read Love Poems from God. It is a wonderful collection of poetry by 12 writers, of all places and times and faith traditions. From the Persian mystic Rumi to St. Teresa of Avila, the poets beautifully describe the love affair between God and us. In these pages, St. Catherine of Siena writes: I won’t take no for an answer/God began to say to me/when He opened His arms each night/wanting us to dance. And this, from Meister Eckhart: It is a lie--any talk of God/that does not comfort/you.

The God these poets celebrate cares so deeply about us that He never lets us go. He writes us love letters in the stars. The faces of our kids are scribbled with the Divine “I love you.” We just need to learn to recognize His handwriting. And, unlike the closely guarded private love letters between two people, this is a God who yearns for us to share Him with everyone we meet, for the sheer joy of it
. 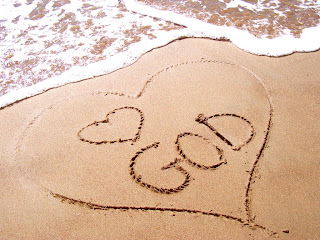 So this Valentine’s Day, when you recall that rush of emotion that is new love, amid the Hallmark cards from your spouse, and the lace-paper covered hearts from the children, look for His love letters to you. I bet you’ll find some. Remember, today and every day, that you are so precious in His sight. You are, indeed, the beloved.

Posted by Elise Seyfried at 4:01 PM No comments: