Steve and I will ring in the first two weeks of 2013, utterly alone. After many years of constant household company, NO ONE will be around in early January. Sheridan and Ya-Jhu, who have been (to our delight) living with us since their marriage, are off to Taiwan for another wedding celebration, this time with her family members who could not join us here for the ceremony  in June. They invited Julie to Taiwan as well, and Julie, who has been working feverishly to save up travel money, can afford to go. Evan and Rose will welcome the new year in Washington DC, no doubt at a fun party; likewise PJ and his girlfriend Kylie at Millersville University.

And this is just a sneak peek at the future. One of these days, everyone will be gone for good. No more ferrying to piano lessons and soccer games. No more cooking vats of food for a ravenous multitude. The decibel levels around here will decrease dramatically. It’ll be just us aging lovebirds, puttering around a suddenly huge house. Thanks to our clever financial strategy (oh, wait, we forgot to develop one!), retirement for either of us isn’t an option. We won’t have the pleasant distraction of golf vacations and cruises. No, we’ll continue working forever. Oh, well, at least during our daytime hours we’ll have interaction with the outside world. But what of those looong evenings and weekends?

I have to confess: I am nervous. What will Steve and I have to say to each other, after almost three decades of discussing mainly child-rearing issues (“Whose turn is it to change the baby’s diaper?” “It was yours, an hour ago— now you have to change the sheet too!” ) Will mealtimes begin to replicate the ever-lengthening dining table between the couple in Citizen Kane, as we have less and less to communicate?

We felt lucky to have had seven years of wedded bliss before beginning our large family, felt  we’d had our “couple” time and were basically set forever in that department. We’d figured without this attenuated other end of married life. Mind you, we get along fine (most of the time); it’s just going to be a huge adjustment.

And it starts right now. We'll be home alone on New Year's Eve.  I feel oddly shy, and will find myself putting on makeup and dressing carefully for our solo dinner that evening. I'll peruse the New York Times for witty/insightful talking points.  I remind myself that this is the same man I fell in love with at age 17, who has held my hand through the darkest of days. Yet he seems a bit of a stranger to me at the moment, and probably I to him.

This snowy December night, we’ll light a fire and spend time reminiscing. But I hope we can also dream a little about our future, with anticipation instead of melancholy, as we begin a brand-new chapter in a well-loved book.  The Story of Us.

Have Yourself a Mayan Little Christmas

Don’t know about you, but I’m approaching December 21st with relief. No more trips to the mall for last-minute gifts! No more mall, either!  The fact that we have only one pathetic little clump of outdoor lights in one big tree outside will no longer matter.  The unwritten and unsent cards—no worries! If the world has to end, what better day than tomorrow? I’m probably as ready as I’ll ever be to arrive at the Pearly Gates (considering I keep committing the exact same sins over and over and I’m not optimistic about change), so bring it on!

I never have been completely ready for Christmas, but sometimes my lack of prep has been comical. As just one example, for years I was included in a neighborhood cookie swap.  I am not exaggerating when I say that I never began baking my cookies until the midnight before the party at the earliest. One memorable year I was an hour late for the festivities because the cookies were still in the oven. Nothing says stress quite like racing to an event that late, holding limp bags of hot, crumbly cookies. For some strange reason I was dropped off the invitation list eventually. Whew!

Working in a church means there’s Advent/Christmas craziness too. During the critical week when most people are shopping and decking halls, I am always running a prayer center which requires my constant presence in church daily until 9 PM. I sit in the narthex and stew about what isn’t getting done at home. And now it’s (supposedly) less than a week until our big day (Christmas Eve). By tomorrow, Meg the secretary has to assemble 800 bulletins for 5 different church services. And things could be better for the 4 PM pageant at this point: my Innkeeper just resigned, and I haven’t been able to find a live Baby Jesus.  Arrggghhh!!

But wait! Maybe we’re all off the hook! Those prescient Mayans ended their calendar  at December 21,, 2012, which to many people automatically means it’s The End, period (and not, perhaps, that the Mayan civilization ended before anyone could update the calendar).

So what am I doing today?

I’m avoiding chores like crazy, because I’d hate to clean the house if it’s all coming to a screeching halt tomorrow. What a waste of energy and furniture polish THAT would be!  I plan to consume a 10,000 calorie dinner. I will go to bed without flossing (who needs teeth in the afterlife)? 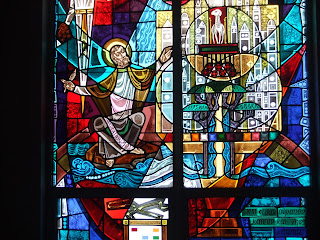 I want to look back on today and know I spent it doing things I loved to do, with people I loved. Prophecies and prognostications aside, we none of us know the End of the Story. Only God does. Meanwhile, I hope I can remember to cherish my life, every minute. And as I pray and pray for the grieving families in Newtown, I give thanks that I am lucky enough to have my kids to hug, even if it’s just for today.

Posted by Elise Seyfried at 1:33 PM No comments:

The Seyfried children all own passports with multiple stamps. They have been to: France, Germany, Italy, Switzerland, the UK, Thailand, Singapore, Brazil, Uruguay, Jamaica, Costa Rica, Guatemala. Though these travels were completely self-funded, the kids know they are still lucky to have had these chances to see so much of the world at such young ages.  They may hail from Oreland, but they have never been Orelandbound.

Seyfried Passport Follies include several stories of loss. Sheridan used his passport as basic ID for years (he is still driver’s license-less) without incident. Now that he has a photo ID, he’s lost that precious book. Luckily he discovered this early enough to re-apply before he and Ya-Jhu take off for their meet-the-relatives trip to Taiwan later this month. When Rose spent a year in Thailand, she put her passport in a wooden box for safe keeping.  MUCH to her dismay, when she opened the box, the passport had been (horrors) munched on by hungry Thai termites! Evan is currently on vacation in South America, and left his passport in a taxicab in Montevideo. God and the taxi driver were good, however, and man and book were swiftly reunited.

I didn’t own a passport until I was 43. I’d seen a decent amount of my own country, but none of others (except pre-passport Canada). Since childhood, I’d longed to see the world, but it was, it seemed, not meant to be. My mom had had similar yearnings, particularly to see Ireland. Mom died without a passport, alas, and I’ll always be sad we didn’t make sure she got on that plane.

The ground was broken by my trip to Jamaica in 2000 with Rose and sister C, and not long after I went on mission trips to Central America. My worldview has expanded drastically. I still long to go to Europe, Asia and Africa…and now I dare to hope I will live to accomplish my goals.

My advice to the passport-less? Invest in one if you can! The world is out there to be experienced, and it is a crime to be forever Orelandbound (or its equivalent). You truly never know what opportunities may open up for you to travel far, and it’s smart to be prepared. My Steve is applying for his first passport, and I think it’s a wonderful statement of optimism.

This late-fall evening, I pull out my passport and dream of journeys yet to come, future stamps from Spain and Scotland, Tanzania and Vietnam. I feel hopeful and excited, and a whole lot less Orelandbound.

This late-fall evening, I wish you the same hope and excitement. Send me a postcard, if you think of it.
Posted by Elise Seyfried at 6:49 PM No comments: