Oreland has an “online yard sale” website. Never participated because I still have fresh recollections of many “real” yard sales we have had. We had these every couple of years, because we never learned.

We would spend the night before dusting things off, labeling and pricing. We were sure everybody was going to LOVE the assortment of costumes that were donated to us for our theater and we couldn’t use! Who wouldn’t kill for a giant bear suit?  My collection of second-string cookbooks including The Canadiana Cookbook, (which, if memory serves, had rather too many recipes featuring maple syrup) was also up for sale. As the evening wore on, we became greedy and started to price things higher and higher. My mother’s wedding gifts--sterling silver platters so heavy they could double as murder weapons? Ka-ching! Sterling is worth a fortune, isn’t it? The Madame Alexander dolls? $50 each! No, $75!! We went to bed with visions of dollar signs dancing in our heads.

In the cold light of dawn, we set out our card tables and arranged our bounty.  Everything looked a bit shabbier than it had the night before, but we were optimistic!!

As the hours crept by, we were reminded why we always did so poorly with yard sales—our stuff is either no good to begin with, or so badly maintained as to be almost worthless.  In late afternoon, the giant bear suit would go out on a table marked “Free.” My Canadiana Cookbook found a home with my wonderful Canadian neighbor, who most likely purchased it out of pity. No one wanted the Madame Alexander dolls; NO ONE wanted the tarnished sterling silver platters.  In the end, we’d wasted an entire day and made just enough money to get a takeout pizza (no extra toppings) after we lugged things back inside.

My sister C has always made a bundle at her yard sales, perhaps because EVERYTHING she and her hubby Rob own is in mint condition. It seems Julie is a chip off that block, because she’s registered on the yard sale website and is doing very well. The old rabbit pen, costume jewelry, never-opened nail polish (yes!)—all have been snapped up quickly. Jules urges me to sell online as well, and the other day I rounded up some things to photograph and post. Haven’t done it yet, because I’m sure our every knick-knack bears the Seyfried curse and will languish, embarrassingly unsold, forever.

Someday I’ll go for it and mark down the few items we have that are worth anything, just for the thrill of a successful transaction.  And as we sit counting our cash in our empty dining room (table and 8 chairs! $20! OBO!) we will figure out if we made enough money to go out and re-buy our own table and (8) chairs, which will no doubt have been marked way up by a savvy yard saler.  We will not pay a penny more than $200! We have our pride!


Posted by Elise Seyfried at 4:23 PM No comments:

Happy February 15th, everyone!  How did you ladies do yesterday? Candlelit dinners in fancy restaurants? Massages at the spa? Diamond bracelets? My sweetheart has never had the income to pull off a big Valentine’s Day treat for me, but that’s OK. My expectations for this rather silly holiday are pretty low.

When I was little, my mom always forgot to buy us those Valentines that came 30 to a box with Daffy Duck and hearts on them. But that was OK, because giving them out in class was hit-or-miss. Sister Vincent couldn’t have cared less about our tender feelings when some of us only got a few and others a brimming book bag full. I used to wish Joseph Grazie (the cute Italian kid who always gave off a faint, exotic whiff of garlic) would give me a Valentine. But no, I only got them from boys like John Albert, who tried to impress me by eating an entire box of Crayolas (he promptly threw up in 8 brilliant colors).

By the time my kids came along, child psychology had been invented. Everybody had to get Valentines from everybody, or no one would get Valentines from anybody. This fair-handed approach to romance was a bonanza for Hallmark, but a pain for parents. Every year I bumped into other moms in the store on February 13th, frantically scooping up 30 to a box cards (still, amazingly, with Daffy Duck and hearts on them) and rushing home to “help” our first graders write out their classmates’ names (a painful procedure indeed). Some overachieving parents upped the ante by attaching lollipops or little bags of M&Ms to THEIR Valentines, while the rest of us just sent in smudged and crossed out wishes for the whole class.

As I was married so young, I got to skip the “dateless on Valentine’s” ordeal, but I know plenty of people, male and female, who suffered through years of this nonsense. One friend, I swear, had a string of beaux who all conveniently (for them) broke up with her in late January. Isn’t life tough enough without having other people’s joy thrown into your face for an entire 24 hour period of time every year?

I have to say my children’s cards to me were pretty cute. One of my favorites was signed, “Love, PJ Seyfried” just in case I was wondering who “PJ” was.  And Steve has (almost) always written really sweet notes, often accompanied by flowers.  No card for me this year, though, and the only flowers on the table are a dozen red roses that Julie received from her thoughtful boyfriend.  But I truly don’t care if the loving gestures happen on a precise schedule (Steve is actually cooking me dinner tonight instead), and I wish the world wouldn’t either.


So Happy Day After a Holiday Named for a 3rd Century Christian Martyr!  I only ask that you lucky recipients keep your diamond bracelets to yourselves. The rest of us don’t want to know.

Posted by Elise Seyfried at 12:19 PM No comments:

One of the things I have noticed since I left school 35 years ago is that I don’t take many tests anymore. Oh, I took the driver’s written test when we moved to Pennsylvania (I barely passed, and I’d been driving in Georgia for 7 years, which speaks volumes about the Georgia DMV), but other than that, and quizzes in magazines (“Are You a Sensuous Woman? Six Sizzling Questions That Reveal All!”), I haven’t sharpened a No. 2 pencil in ages.

And it’s a shame, because back in the day I was a demon test-taker. In Catholic school we were awarded miraculous medals for perfect spelling tests, and I amassed a collection to rival the Vatican’s. In high school, I actually loved taking the SATs ( though I pretended to hate them, to fit in with my grumbling peers). I happily filled up countless blue books with exam essays in college.  There was truly nothing I enjoyed more than tracing the history of the Industrial Revolution in 15 minutes! 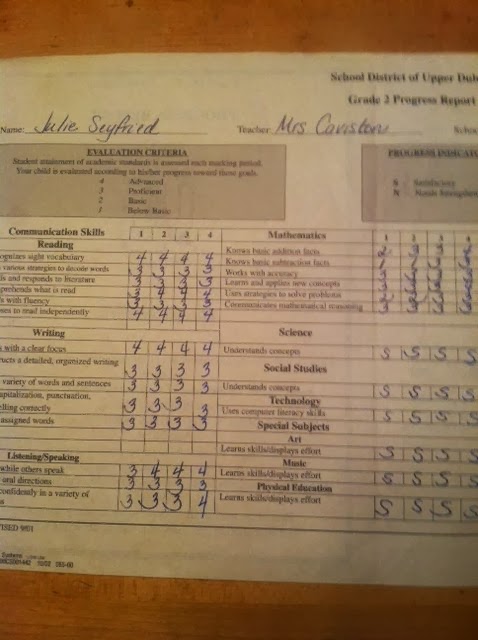 Among my children, several of them are also good test takers.  Multiple choice comes easily to them, and they can fill in the blanks with the best. They are proud of their prowess, and rightly so. I hate to tell them, though, that as soon as they leave the halls of higher learning, they’ll rarely test again. Oh, there are some professions that require more testing (medicine, law), but by and large, examination know-how is put in mothballs in adulthood.

Now, I move through my days and and months and years utterly untested (in the academic sense. Plenty of life tests in other areas, of course). But I do wish I was still graded as I was in school. I want a big fat report card filled with A plusses, several times a year! After all, I share, I participate in class discussions, I play well with others.  I can balance my checkbook while cooking dinner for five picky kids without missing a beat.  I’m the Carpool Queen, the Princess of the Pediatrician’s Office, Mrs. PTO America. And I have nothing to show for it all-- no shiny trophy, no papers with “Excellent Work!!” on them, no  Outstanding Student award.  Just the satisfaction of navigating my world fairly well, and who needs that?  I want gold stars, and lots of them.  And I’ll never get them.

I think we probably need to revamp our educational system, to better prepare our children for the Real World.  They should learn, early, that the world does not care if they can diagram sentences, or correctly figure out analogies, or spell “obsession”.  Useless information!  All google-able!  Tests as we knew them will eventually go the way of the dinosaur, and that’s probably a good thing. However, as a bit of a dinosaur myself, when that time comes I will feel a twinge of regret.  After all, where else in life do you get the thrill of putting down your pencil with two minutes to spare?


Posted by Elise Seyfried at 5:52 PM No comments: