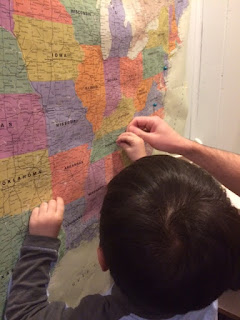 It’s a game they are playing. Every night Evan leaves a message, telling Aiden where he has stopped for the night. Aiden then goes downstairs to the big US map on the wall, finds the destination (with a little help) and puts a push pin there. Aiden’s shushu (Chinese for uncle) has covered a lot of territory since his departure on Monday. He needs to be in California to start his new job by tomorrow, which still involves many, many miles on the road. So far Evan’s luck as held, and he has not run into terrible winter driving conditions (he deliberately plotted a more southerly course). Aiden thinks he will make it on time, and I do too.

Aiden has always loved maps of all kinds. He is also crazy about Evan Shushu. That combination has been a winner, because Evan has traveled quite a bit during Aiden’s 3 ½ years, and my little guy loves to trace his adventures.

Sometimes the journeys have been American, such as Ev’s cross-country drive helping a friend resettle on the West Coast. Other times, Aiden has needed to switch over to the world map on the other side of the room, where even at a very young age he could point out Barcelona (where Evan went to graduate school) and other spots Evan hit in Europe and Asia. Last winter, his intrepid uncle went with another buddy to Argentina for five weeks of trekking that included time down in Patagonia. This location particularly fascinated Aiden for some reason. Several times daily, Aiden would put on his small backpack and head for the front door. “I’m goin’ to see Shushu in Argentina!!” he would call out. We would solemnly wish him safe travels. Three minutes later he would zip back into the room, journey completed.

What, I wonder, does Aiden think of all these places, depicted in so many different colors and shapes on his maps? He knows where many of them are, and knows some personal connections attached to them too: Indiana, where Steve was born; NYC, where I was born; Thailand, where Rose Gugu (aunt) spent a year. He himself has been to Taiwan several times, and can easily zero in on Taipei, where Ya-Jhu’s family lives.

When I was little, I pictured the world as incredibly diverse and exciting. Then I spent time in different US cities, and was sadly struck by the sameness of so much that I saw—the same fast food places, malls, hotel chains. But in recent years, traveling more, and looking past the surface, I am heartened to realize that little me was right--everywhere IS special and unique.

I am so grateful that my loved ones and I have been able to travel, and I look forward to Aiden experiencing the world as more than push pins in a map. Putting on a big backpack someday, walking out of the house, and really meeting his beloved shushu in the amazing Argentina of his dreams. 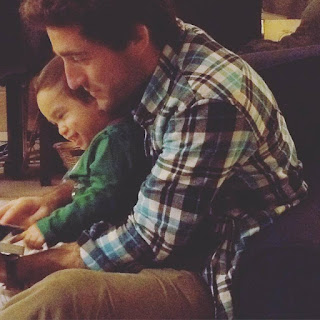 Posted by Elise Seyfried at 8:05 AM No comments:

I was in center city early yesterday afternoon, in line at Starbucks, when I checked my phone. Two missed calls from my sister C in Honolulu. A little unusual, as we try to always time our calls to one another in advance, but not unheard of. Then I got the text: We just got alert of inbound missile. It says not a test. I immediately started shaking, and stepped out of line. Sheer panic set in; as I tried to call her, I blanked out on the last four digits of her phone number. By the time I reached her, she had good news: it had all been a mistake. But she described the horrific previous few minutes, trying to call all of us, possibly to say goodbye; apparently everyone in Hawaii had the same idea, because the calls weren’t going through. As for me, during the few moments before I talked to her, everything else on my mind diminished in importance to nothingness. Who cared about meetings, or deadlines, or annoyances at work or home? Nothing mattered as much as my sister’s survival. This dread was coupled with another: if we were indeed on the brink of nuclear war, how would any of us survive?

As we all know now, the terrifying message had been sent out in error; there was no missile heading to Oahu yesterday. But even as relief washed over me, I recognized that the message was all too credible. We are not only capable of the world’s destruction, but powerful people with access to nuclear weapons seem to be taunting each other into action. I am aware that existence has always been fragile, but that doesn’t minimize the risks and threats facing humanity right now.

Riding home on the train, I thought: how would I occupy myself if we suddenly had only a few minutes left to live? Would I fall to my knees, praying nonstop until the end? Make farewell phone calls: my children living away from me, my sister, my dearest friends? After that, would I gather my beloved Oreland family and just hold on to them? Yes! I often say that my faith, the loss of my sister Mo, and being with Mom as she passed away, have made me largely unafraid of death. But yesterday reminded me that I am still fearful. I am also saddened that life on earth may possibly not continue through Aiden and Peter’s old age.

It may go out with a bang, or a whimper, or something in between, but at some point life WILL end, for everyone. That point may be millions of years from now, or fifteen minutes. So may I try to live in love, the love that casts out fear. May I try to spread peace and understanding, in the hope that all of us doing so may prolong our time here.

I will never forget the sinking feeling I had in the coffee shop yesterday, but may it not define me.